Posted on November 7, 2017 by damewine
ShareTweet

It is always interesting to see how we handle unimaginable events in our lives. I lived in downtown Manhattan during 9/11 and if someone would have presented that scenario as a hypothetical situation to me, I would have instantly replied that after that disaster, I would have gotten my butt out of there… Sadly enough, that situation did happen, and not that far away from me. Yes, I was in a state of panic and pain, but something funny and unexpected happened… I chose to stay, to be close to where the attacks happened… close to the World Trade Towers… to mourn and to eventually find a way to get past this horrible tragedy as part of a community, together. I couldn’t help but have some of those feelings of panic and pain flashbacks during the destructive wildfires in Northern California recently… I knew many people in Napa, Sonoma and Mendocino that were at risk of losing their homes, jobs, businesses and potentially their lives. Yes, California is used to wildfires but these recent fires, that raged for weeks, were on a whole different level of devastation; some areas in California will take many years to fully recover… it was horrible to have to sit here on the other side of the country feeling helpless as I watched so many people I knew lose so much in a matter of hours.

A few weeks ago, I had the chance to talk over lunch to a winery owner from Sonoma who was visiting New York City. I was anxious to hear how things were out in her neck of the woods. I ended up walking away from that lunch feeling a lot more empowered and hopeful than I could have anticipated. 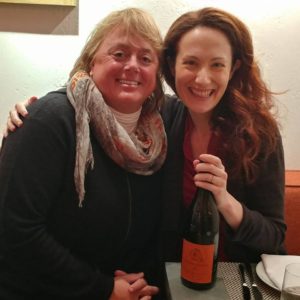 Debra Mathy, owner of Dutcher Crossing Winery, told me that her winery and vineyards, like many others’ did survive, and the biggest issues were helping people who lost their homes, like in the suburbs in Santa Rosa, and many of the wineries were providing shelter and food to the victims of the fires (her small winery was providing 100 meals a week).  During these tough times, the local wine producers really shone as important pillars of the community.

It was interesting to learn more about Debra and how an “outsider” like herself became such an important part of helping the Sonoma wine community survive. She is originally from Wisconsin, moved to Arizona and Colorado at different points in her life, and made a career as a teacher, focusing on nutrition. But it was an early experience, at 15 years old, of a field trip to Paris with her French class that would plant the seeds of wanting to live a life in the wine world. While she was living a “safe” life of a proper profession that offered security, she could not help but to still have that wine dream, which would just deepen with each of her visits to Napa and Sonoma over the years.

Over eleven years ago, Debra was hit with the fact that her father had stage four melanoma cancer (now, each year she has a tribute wine to benefit melanoma cancer research). Her father, a man who spent his whole life working to provide for his family, told her on his death bed that she should live her dream now. Three months after his death, she bought a tiny, charming winery – Dutcher Crossing – that sits in the junction of two creeks, Dry Creek and Dutcher Creek, in Sonoma County.

Her first vintage was the great 2007, and, naively, she though that all vintages would be that easy. But the hard core reality of being at the mercy of Mother Nature was not the only tough challenge she faced. She was the first single female winery owner in Sonoma County, which is an area that is used to many of the winery owners typically being male as well as being established there for generations. Debra remembers a first encounter of an elderly woman coming up to her, shaking her hand, while asking her where she was born… when she replied with “Wisconsin” the woman stopped shaking her hand, quickly walked away, and never spoke to her again… that was her first inclination that it was going to take a lot of grit and tenacity for her to establish herself within the Sonoma community. This was not a problem for her as a Midwesterner with a father that made sure she wasn’t afraid of hard work. 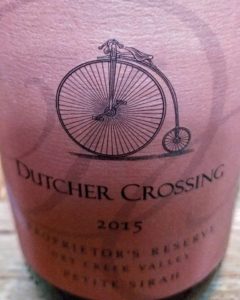 Debra kept the winemaker and staff from the previous owner at the winery and credits them for helping her along her mission to learn as much as she could about the Dutcher Crossing wines. Also, she knew that having a winery was about relationships and she went out of her way to consistently stop by vineyard owners’ homes to say hello or to lend a helping hand while making herself a fixture at Sonoma wine producer meetings. As the years passed, the community realized she was not there with an unrealistic dream without the backbone to make it work… hell, yes she had a backbone, and through time, proved herself a pillar of the community that would give advice to other producers about how she had become so successful. Debra has established a loyal wine club, selling out of her wines each year, and took the winery from only making a few different wines to making 30 different wines that represented the specific plots of the various grape growers she has gotten to know over the years… there was even one grower who passed away recently and one of his wife’s first phone calls was to Debra… she takes pride that her growers trust that she has their backs.

During our lunch, Debra did admit that she was not terribly comfortable talking about herself and she seemed to want to spend more time talking about her incredible employees, for whom she opened her wine cellar when the fires were going on, and her neighbors, fellow producers and those special relationships with her growers. When I asked her about her wine labels, she said that the drawing on them came about because the artist creating them started to dig within her personal life and found out about the story of her father telling her to live her dream… and his last gift to her was a high-wheel bicycle, which the drawing depicts. Because her father encouraged her to live her dream, Sonoma is so much stronger for it. Pillars of the community do not need an ancestral tree for deep roots… they just need to understand the spirit of a place, and Debra, no doubt, understands what it means to be Sonoma Strong.

Tasting of Dutcher Crossing Winery at Lunch on October 24th, 2017 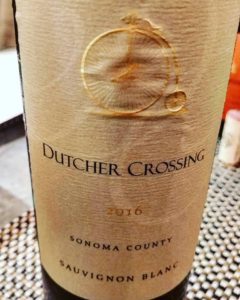 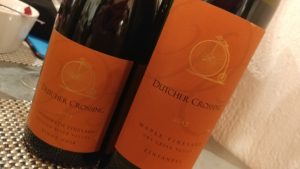 -2015 Proprietor’s Reserve Petite Sirah, Dry Creek Valley: 97% Petite Sirah, 2% Zinfandel and 1% Syrah from Estate Vineyards in Dry Creek Valley. Opaque color, and surprisingly inviting as Petite Sirah can be fiercely tannic… the flavors of boysenberry and plum pastry tarts with multi-layered, complex notes of fresh tobacco and leather made this wine irresistible; selfishly, I am happy that I have it as a sample at home. It is a great wine to decant for hours – while it opens with granite and exotic spice, the muscular yet managed tannins start to mellow throughout the day, as I kept it open while I wrote… it could continue to age for 15 years or go great with a steak tonight!