Only as Good as One’s Community

Posted on October 29, 2017 by damewine
ShareTweet 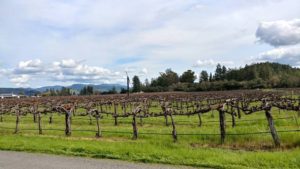 Photo from One of My Trips to Napa Valley

I always get frustrated when I hear stereotypes about New York City, my home. So many times, articles that go viral on the web or stories highlighted in blockbuster movies focus on the wealthy people living luxurious lives ruthlessly stabbing each other in the back, and so, this seems to be the NYC that many people visualize in their mind. I’m not saying that the aforementioned doesn’t exist at all but it represents a very small percentage of the population. The NYC that I know and love is filled with people struggling with impossible circumstances: barely paying our bills, finding enough time and space, and living with large amounts of stress that are mainly rooted in the fact that we are not getting everything done… tick tock tick tock… Why on earth would I love these things about my city?! Well, it would not be possible for the middle class, let alone poor people, to survive in such a situation if there wasn’t a strong community, and if one word can sum up NYC, it would be community.

Napa Valley is another one of those places that people think are populated with just a bunch of fat cats rolling around in money, and so, are on the receiving end of similar misinformed statements to those about New Yorkers, “It must be nice to have that kind of money” (like a character exclaims on “Seinfeld” when Jerry’s retired father misses the early bird special for dinner). These kinds of misleading stereotypes are misnomers that lead people away from knowing the depth of Napa’s story. The original key figures that raised Napa Valley to wine glory were farmers that had a passion for wine… there was a time before The Paris Wine Tasting of 1976 (aka Judgment of Paris) when those who owned Napa vineyards were on the brink of bankruptcy… their dreams were fading, but then, the Judgment of Paris brought world recognition and their hard work was finally appreciated. The big, bold personalities of Napa – which are wonderfully depicted in Richard Mendelson’s Appellation Napa Valley – decided that they needed to work together as a region to define themselves and to try to give all vineyard owners and producers a fair shake while keeping the integrity of being a high quality wine area.

I received a couple of samples of Silverado Vineyards a while back ago and the time never seemed right to try them or talk about them. Well, after this past month of hell for Northern California that involved, at its peak, 21 major wildfires burning an estimated 245,000 acres (99148 hectares), 100,000 people evacuated, 8,900 structures destroyed, and heartbreakingly, 42 people’s lives lost, it seemed like the perfect time to try these wines as Napa Valley, one of the areas hit hard, fell heavy on my heart. These figures I give are current as of October 28th, 2017 and so check out the Cal Fire website to get an updated damage report. 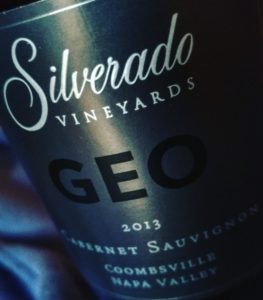 Silverado Vineyards is tied to many of those captivating stories that helped to shape Napa. Abel McFarland, who planted vitis vinifera (the species of vine that is most common for making wine) on the Silverado property in the 1870s, was supposedly one of those fantastical Wild West characters who was into gold mining and gun fighting. Their GEO wine (tasting note below) comes from the Mt. George Vineyard which was founded by Henry Hagen – a man whose Cedar Knolls winery won a Silver Medal at the 1889 Paris World’s fair. And in the 1980s, when Napa Valley was going through the process of redefining their different AVA (American Viticultural Area) boundaries, it was Silverado Vineyards that was used as an example – specifically for the much desired Stags Leap District – to illustrate that Napa should base the dividing line of districts on research done on the type of soils and aspects that represent any given district’s classic style as opposed to superficially basing it on physical markers that neatly help break up the AVAs on a map. Silverado Vineyards had been included in the original AVA but their adjacent vineyards to the west and north that were excluded were added once research came out proving their relation to the Stags Leap terroir. 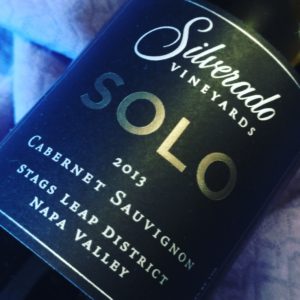 In 1980, the construction of Silverado Vineyards winery was started by Ron and Diane Miller – Diane being the daughter of Walt Disney, and so, people mistakenly associated Silverado Vineyards with the Disney corporation when in fact it had always been a passionate Miller family business with no association with the media conglomerate. Although there is a wink towards Diane Miller’s famous father with one of three Cabernet Sauvignon Heritage Clones found on the Silverado property, analyzed and designated by UC Davis as the Disney Silverado Heritage Clone because it represented such historical qualities that are distinctive to the area.

I remember around 7 years ago being on a wine education trip in Napa. One of the Napa guys on my bus started pointing out a distant area that had a bunch of tiny homes packed right on top of each other and he said that THAT was the “real” Napa Valley; where the people who worked in hospitality, in the wineries and in the vineyards lived their lives and housed their families. It was the Napa that no one wanted to know, as it was easier to take pot-shots at the wealthy investors who sunk tons of money to create a place where tourists could escape a dreary existence to live in a fantasy land for a short while.

I think some people often miss the most important thing about Napa Valley, and I honestly admit, I was once one of those people… Napa is a diverse community of people that spread a wide range of economic status, built from the sweat and blood of those that saw it as a promise land for everyone, and it continues to flourish for those with limited opportunities in life because of wealthy benefactors who want to keep the Napa dream alive. Actually, the Napa Valley Vintners association has raised and invested $170 million from Auction Napa Valley to benefit their local nonprofit organizations including healthcare and education for those who cannot afford it. And at this time, Napa as a whole is hurting, not so much the wines (most of the grapes were picked before the major wildfires in that area started, and many wineries used generators to get through their ferments when they didn’t have electricity) but the Napa people. They took a big hit from the loss of their homes, their businesses, their jobs… Great wine is what has helped to keep this community going, so we should buy their wine, visit their wineries and show our appreciation for a place that built their name by coming together to help each other out… Napa has always known that they were only as good as their community, so let’s show them that their community exists beyond the state of California, and be a part of that wonderful Napa spirit! 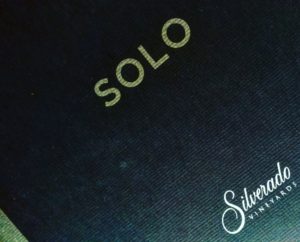 –2013 Silverado Vineyards, SOLO, Stags Leap District, Napa Valley: 100% Cabernet Sauvignon, Heritage Clone, with all of the grapes coming from their Silverado vineyard. Lots of vitality and bright red currant fruit is surprising on this Napa Cab, with more subtle nuances of dusty earth and spice but the pristine, fresh fruit that is expressive on the long finish really makes this wine stand out. Only 2, 476 cases made.

–2013 Silverado Vineyards, GEO, Cabernet Sauvignon, Coombsville, Napa Valley: 88% Cabernet Sauvignon and 12% Petit Verdot with all of the grapes coming from their Mt. George vineyard. Seductive smokiness on the nose with cigar box and fresh tobacco notes and is more structured on the palate compared to the SOLO. Dark and brooding blackberry fruit with hints of cocoa powder and just a touch of grip from more noticeable tannins allows one to chew into these alluring flavors with a juicy, prolonged finish. Only 2,200 cases made.