Is Blending Essential in the Production of Excellent Champagne?

Posted on November 26, 2015 by damewine
ShareTweet 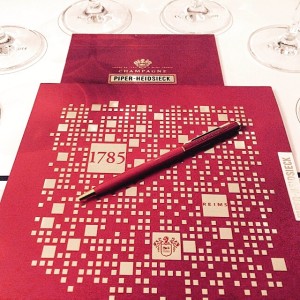 “We are what we repeatedly do. Excellence, then, is not an act, but a habit.” – Aristotle

I always think of this quote when I think of Champagne. And it was certainly on my mind when a few weeks ago, November 5th, I was given the chance to taste Vins Clairs with Piper-Heidsieck’s Chef de Cave (the person in charge of the winemaking team) Régis Camus. 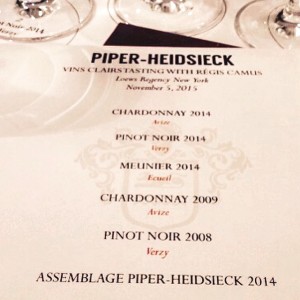 What are Vins Clairs?

Vins Clairs are the base wines for Champagne that have already gone through first fermentation (in this case also malolatic fermentation which rounds out the acidity) as well as other adjustments. There are typically many different lots of base wines that are blended into a final “assemblage” that will then go through a second fermentation in bottle.

I did skip a lot of details in the above process but I wanted to focus on the topic at hand.

Why do they blend wines in Champagne?

The northerly region of Champagne is on the same latitude as some areas in Canada so it is a marginal climate – a climate that has historically had problems with ripening grapes. And so, over the centuries, blending and a little bit of sugar here and there has helped to balance Champagne. It has become one of the greatest examples in the wine world of how the skill of the winemaking team can bring out the greatness of a wine that is expressed through its remarkable consistency with their Non-Vintage wines year in and year out.

Is it a quintessential part of Champagne?

Even though many Champagne houses have their vintage wines (which are supposed to be made in only the great vintages), their style and quality is judged and assessed overall by the quality and style of their Non-Vintage wines. Most people do not think of La Grande Dame when they think of Veuve Clicquot – they think of Veuve Clicquot, which is interesting because the vintage La Grande Dame is typically very different in style… but I digress so back on topic!

First, let me talk about my own personal experience with Piper-Heidsieck. I worked for a time in distribution in New York City – and I just happened to work for one of the largest distributors in NY. One of the brands in my portfolio was Piper-Heidsieck. Many big retailers carried most of the Champagnes but my accounts were mainly restaurants. As you can imagine the restaurants could only carry a few Champagnes. I would always try to get them to buy Piper-Heidsieck, but other brands such as Moët and Veuve Clicquot would always win those spots because they were in high demand. When a wine director would allow me to taste him or her, or even better, the staff, on different Champagnes blind, Piper-Heidsieck was always the favorite.

Why would this happen?

In my mind, it was not because Piper-Heidsieck was higher quality. Moët and Veuve Clicquot are both high quality Champagnes too, no doubt about it. I believe it was because Piper has a more generous quality, which is more appealing to a broader audience when it is first released. The high portion of Pinot Meunier in their Non-Vintage wines helps to give lots of fresh, ripe fruit that make them accessible wines. It is interesting to note that Piper-Heidsieck was known before the 1990s as an unyielding Champagne wine that had to be aged 2 to 3 years after purchase to receive pleasure from it. They were able to develop a friendlier style with blending (as well as allowing their base wines to go through full malolatic fermentation).

We tasted five separate base wines (more detailed notes given at the bottom). And then we were able to taste the final assemblage for the Non-Vintage that was released last year of which the five base wines were a small part with over 100 other base wines from various vineyards making up the final wine.

It was not only interesting to see what the three different varieties brought to the blend: Chardonnay with minerality and acidity, Pinot Noir with structure and body and Pinot Meunier with ripe fruit (Régis Camus used the word matured) and fresh flavors – but it was also interesting to see how the reserve wines came into play. 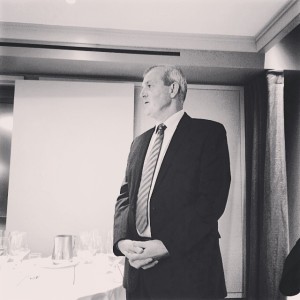 Régis Camus talked about the constant struggle with reserve wines for him and his team. They always need to look at their inventory and, even in a great vintage year, a year in which they would love to sell a lot of vintage wine, they end up holding a lot for their reserve because they know they will need it for consistency in the future. They had to use a lot of reserve wines for the 2001 vintage because it was very austere – making them hold a large portion of the following great 2002 vintage to replenish their reserve wine stock.

Some vintages are seen as being a better component for possible Non-Vintage wines then others. So if a wine is too acidic, it will be more helpful as a reserve blending wine with a warmer vintage such as the 2003.

Older reserve wines give more depth, with honey and caramelized notes, and sometimes a certain vintage is kept longer because it needs more time.

Okay, hopefully that was not too confusing, but one can see how much juggling a Champagne house has to do. It is a massive job to keep track of the reserved wines while juggling the 100 different vats of the current vintage. And compound that with the difficult decisions of how much reserve wines to use and how much of the current vintage to hold back.

All of the large Champagne houses find blending essential. Even a house that only releases vintages, such as Dom Pérignon, needs to blend all the different Pinot Noir and Chardonnay vineyards to always show their style through the filter of vintage variation.

Over the past decade, there has been the emergence of a niche following for grower Champagnes. Marie-Noëlle Ledru is a good example, with only 15 acres (6 hectares) of vineyards in the village of Ambonnay, known for great Pinot Noir. Champagne has a long history of the land being owned by proprietors other than the big houses. And hence long term contracts and relationships (with some Champagne houses actually owning certain vineyards) have become part of the process of making fine Champagne as well.

But some small growers have found (if they had the inclination, talent and passion) that it was more beneficial to sell their wines under their own label, not only because of a niche demand for these wines in certain cities, but also it is actually possible to make great Champagne from a single vineyard since Champagne’s overall climate has become a few degrees warmer over time. A few degrees does not sound like much, but considering that it is a couple of degrees more over several months in a growing season – then it can make a significant difference. The impact of this change in Champagne’s climate is noted in the CIVC (Comite Interprofessionnel du Vin de Champagne) reports that harvest takes place in the region on average 14 days earlier than in the past.

Alternatively, Régis Camus said that there is still great variability in today’s climate. 2011 was harvested during the summer, 2015 at the end of August and beginning of September and 2013 was harvested in October!

But I think the grower Champagnes are more open to expressing variability of their land and showing “terroir” with more noticeable vintage variation – also, modern factors such as working with better clones, better equipment, and better canopy management in their vineyards help them to produce quality wine year in and year out from a single cru (vineyard).

The quality of the fruit is vitally important to Champagne houses like any other quality minded wine producer. But the major difference is that they do not believe that the potential of quality stops once the grapes are harvested. The attitude of many top Champagne houses is that the quality can be increased by the skill of the blender, as well as the reserve wine inventory of the house, which translates into the great importance of blending. This practice of blending forces many Champagne houses to constantly weigh actions that pit short term quality against long term quality. And as Régis Camus made clear many times that day – he is for long term quality and excellence coming from consistency. Of course he said that it would be impossible unless he had the help of his finance manager, who has allowed him to hold large amounts of reserves, as always in life it comes down not only to our intention but if we have the freedom and resources to follow through on our ideals.

-2014 Chardonnay from the village of Avize in La Cote des Blancs, Champagne
White flowers on the nose with citrus, grapefruit and a sense of minerality, lots of tension and precision – this base wine was mainly used for vintage and reserve wine

-2014 Pinot Noir from the village of Verzy in Montagne de Reims, Champagne
Fruit structure, red and black fruit flavors, and a “fat” rich palate – this base wine was also mainly used for vintage and reserve wine

-2014 Pinot Meunier from the village of Ecueil in Montagne de Reims, Champagne
Régis Camus said, “I wouldn’t know how to do my job if it wasn’t for Pinot Meunier” (also, please keep in mind he was being translated so he may have not said it exactly that way)…. He also called it a fruit palate, which it was with an explosion of ripe red apple and raspberries… I also loved the smell of blackcurrant leaves on the nose – he usually doesn’t use Pinot Meunier for reserve or vintage wines – but he is keeping an eye on a couple lots of Pinot Meunier from the 2004 and 2008 vintages to see how they age

-2009 Chardonnay from the village of Avize in La Cote des Blancs, Champagne
Reserve Wine
A more pronounced nose of minerality compared to the 2014, more candied citrus compared to the fresh citrus in the 2014, the evolved notes of honey and caramel were not there yet; Régis Camus said it takes generally around 8-10 years for reserve wines to get those notes, and in some cases up to 12 years – Régis Camus was translated as saying, “But it is a wine like you ladies, you didn’t get any wrinkles.” So this is a reserve wine that seems it will have a long life

-2008 Pinot Noir from the village of Verzy in Montagne de Reims, Champagne
Reserve Wine
Linear structure and had a precision that is almost comparable to a Chardonnay base wine which indicates this is a reserve wine that will have a long life as well

-Assemblage Piper-Heidsieck 2014
This was the final blend that will represent the Non-Vintage Piper-Heidsieck Brut that will be released in 2018: 55% Pinot Noir, 30% Pinot Meunier and 15% Chardonnay with 10% from reserved wines – it expressed “crunchy” fruit which is a key to the style, with generous fruit flavors, an ample body and a precision of acidity that carries the flavors along a sustained finish

-Current Non-Vintage Piper-Heidsieck Brut
Cranberries and gold apple with good weight and nice bright refreshing flavors, not only is this a great Champagne to pop open now, but the red label, which came onto the market in 1997, makes it a great Christmas style bottle for gifting and celebration

-2002 Piper-Heidsieck Rare Millésimé
Only 525 cases produced
Love the candied ginger on the nose, powerful and exotic Champagne and it was certainly the show stopper of the tasting

Celebrating Wine, Life and Inspiring Colorful People in New York City and Beyond!
View all posts by damewine →
This entry was posted in Dame Wine and tagged Champagne, Marie-Noëlle Ledru, Piper-Heidsieck, Vins Clairs. Bookmark the permalink.