Can producers express the same terroir differently? Or is there only one way to express that terroir?

Posted on March 12, 2015 by damewine
ShareTweet

The first line in The Oxford Companion to Wine says this under the definition of terroir: “Terroir — much-discussed term for the total natural environment of any viticultural site.” 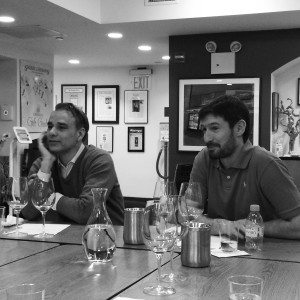 I have been thinking about this topic since my tasting with Jean-Nicolas Méo and Sebastian Cathiard on February 25th. Even though it was a great honor to taste the wines of Sylvain Cathiard, and they were ridiculously stunning, it is the words of Jean-Nicolas Méo that keep echoing in my head.

Jean-Nicolas Méo talked about the importance of expressing terroir, but he also wanted to emphasize that they have a very specific winemaking style that brings a rich texture and focus of the expression of ripe fruit, first and foremost. I have loved Méo-Camuzet for many years, and his Clos Vougeot, which is the wine that has garnered them the most notoriety, has always been one of those wines that have blown me away.

I always knew their wine stood out from their contemporaries, but I never thought of their wines being so dominated by their winemaking practices. But Jean-Nicolas talked about how his father always believed in texture and a ripe fruit quality (almost giving a sweet impression), and accomplished it by not only producing high quality fruit, but by 100% de-stemming, cold soaking followed by a long fermentation on the skins which would reach temperatures as high as 35C, and lots of new oak. This gives the wine aromatics and structure, and these practices make them more accessible at a younger age. 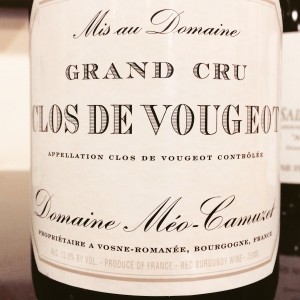 I have to admit that it was surprising how good his 2012 Clos Vougeot tasted that day. I can not think of another producer of this Grand Cru that has such sensuous wines so early… or even anytime in its life, since Clos Vougeot is typically more reserved in style, especially on the body.

It is always interesting for me to hear a Burgundian producer talk about winemaking with such technical enthusiasm. I think because I used to place Burgundy on this unrealistic pedestal that it was quintessentially about place and the winemaking just needed to not get in the way. But when someone in the room asked if the “sweet fruit” quality was reflective of the vintage or vineyard of the 2012 Clos Vougeot, Jean-Nicolas said it was the winemaking, not the vintage or vineyard. And anyone who knows the 2012 Burgundies knows it is not a ripe vintage!

I remember talking to a producer several years ago, who came from a long line of Burgundian producers, who said that in his mind, the villages and vineyards of Burgundy did not show distinct differences because of the terroir, it was the winemaking. He said that producers made their wines in a particular style to meet the expectation of the place. I will not name this producer, as he told this to me during a private tour with only my husband and me. And I think he may have not been as honest about his opinion if he felt it was going to be written down in a blog. But I always think of what he told me.

But do we want all wines from a specific terroir to taste the same with each producer?

Clos Vougeot is a perfect example of producers not only having stylistic differences, but drastic quality differences as well. Yes, it is the largest Grand Cru vineyard in the Côte de Nuits, and you can even feel how it significantly slopes in certain areas when you walk around it. But these differences have something to do with winemaking practices as well. Some producers simply have more resources to buy better equipment and more staff on hand for better practices. Or some, like Méo, believe that even though you have high quality grapes, it doesn’t mean you cannot improve on them… or improve them according to what the ideal style should be to the producer.

What about natural microbial substances on the grapes? Do we want them to flourish to express terroir? Do we take away some terroir if winemaking interventions go too far?

Last year, I went to a seminar that was taught by Dr. Hildegarde Heymann, who teaches at the Department of Viticulture and Enology at UC Davis. She proudly spoke about the incredible work of one of her doctoral students. This student was in the process of proving that there are different  microbial substances on grapes in neighboring vineyards. His studies focused mainly on Sonoma, but it’s research that could be eventually applied to many different regions.

And this made me think about terroir in the sense of the expression of these microbial substances. Are modern winemaking practices keeping us from experiencing these bacteria and yeasts from these specific terroir?

Okay, now I’m going into a natural wine debate. And really this is not a blog post about the idea if producers should risk stuck ferments or bacterial spoilage for a more “natural” product. This blog post is about how far winemaking can go before it no longer expresses terroir.

When we think of expressing our true selves, do we think that we will allow any trait that naturally pops up in our personality? Unfortunately, I have known way too many people who have had the attitude that it was okay to do or say whatever they wanted as long as it was truly expressing themselves!

Or is it better to want to encourage and take on traits that are positive such as compassion, loving, wise and insightful traits, and work on getting rid of those negative traits such as  being selfish, insecure and uncaring. And yes, you can bring up the point that some people are born very compassionate, sweet people… even possibly going against their parentage, and some are born more selfish. They are even conducting experiments on the brain that show an area of where we are capable of compassion, and some people have more activity in that area than others. But no matter what we were handed in life, we can always work on it. They have even proven that people can form new connections in their brains by consciously choosing to think another way.

But let us take it even further. Some people encourage traits in themselves that others may find silly and unconventional. Would you say that a person is not a good representative of where they came from because they are not a typical example of their origin?

You can relate this to grapes. Some are higher quality than others, but in today’s modern times, producers can fix a lot of problems if they get to it soon enough. And there are some winemakers that want to express certain things about their terroir and not other things, and they would like to add some other flavor and textural elements, like oak, to enhance those qualities that they would like to highlight.

And there is no doubt that the Méo-Camuzet wines are great wines that have a huge following. And their Clos Vougeot expresses the terroir, but with a richer, more fruit driven style.

So yes, a producer can express terroir and express it in a different way than many of their counterparts…. and who knows, what is considered atypical now may one day become typical. And things are already changing. You cannot always count on a specific area of the world to employ a specific winemaking practice.

I have never been interested in a person’s pedigree: origin, family tree, education, social status; I have always been more interested in the choices they have made, and who they have decided to become… and I think that’s why I can appreciate a certain amount of manipulation to a wine that gives you a different experience of that place. 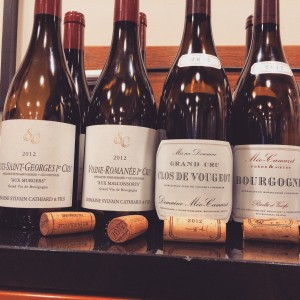 -2012 Méo-Camuzet Bourgogne Rouge
Fresh raspberry with slight truffle… yes, truffle at a Bourgogne level! And good amount of weight for this level, round tannins

-2012 Méo-Camuzet Clos Vougeot
Interesting spice on the nose such as coriander with saline minerality and sweet cherry finish… and the body and texture.. yes, it is very seductive. I know Clos Vougeot is not supposed to be this luscious, and especially from a lesser vintage, but every drop was enjoyable to taste

-2012 Sylvain Cathiard Nuits-Saint-Georges ‘Les Murgers’
Earthy, very structured wine with muscular tannins, black fruit, forest floor…both of Cathiard wines have an incredible energy to them.. much more reserved than Méo but if you wait and take your time with them, they are breathtaking

Celebrating Wine, Life and Inspiring Colorful People in New York City and Beyond!
View all posts by damewine →
This entry was posted in Dame Wine and tagged Burgundy, Méo-Camuzet, Sylvain Cathiard, Terroir. Bookmark the permalink.